Number of Counties in Florida — 67

Florida Taxes — Florida ranks low in terms of the tax burden placed on residents. Based on income, property and other state and local tax collections, the Tax Foundation research organization ranks Florida among the lowest tax states (Florida ranks #5 among the 50 states in 2013; only four states have a lower tax burden).

Distance from Pensacola to Key West — 792 Miles by Road

Florida has more than 11,000 miles of rivers, streams & waterways

Number of First Magnitude Springs — 27
(Florida has more first magnitude springs than any other state.)

Number of Islands Greater than 10 Acres — Aprox. 4,500
(Florida ranks 2nd in the nation by this measure and only Alaska ranks higher.)

Juan Ponce de Leon discovers Florida in 1513 when he lands in NE Florida, possibly near present-day St. Augustine, to claim Florida for Spain. This is when written records about life in Florida began.

First permanent European settlement is established in 1565 in St. Augustine by Spain.

Florida is known around the world for its balmy weather. The state's mild winters have made it a haven for retirees. Summers can be long and hot with showers providing much appreciated relief during the rainy season. Coastal areas also experience gentle breezes during the summer.

The six-month hurricane season runs from June 1 through November 30 and Floridians have learned to be ready when a storm threatens the area. More Information: National Hurricane Center

Number of people who camp in Florida each year — 6 million

There is no official designation of a "State Motto". The motto "In God We Trust" is widely used but has never been formally adopted by the Florida Legislature. 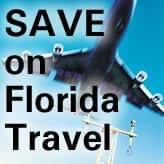 Book your Travel with Us! State of Florida.com
Save up to 70%!
You can find car rentals, discount flights, hotels or complete vacation packages in one place.
Click here to book now!